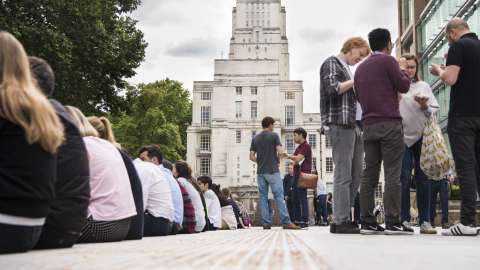 Four Early Career Fellows have been awarded Fellowships to pursue their own research during the period of the Fellowship, May–October 2022, and to contribute to the School’s scoping mission of activities embedding inclusion, participation and engagement in research in the Humanities. The Fellows are based in the Institutes of Classical Studies, English Studies and Languages, Cultures and Societies. Full details of the scheme can be found here.

Dr Kadija George Sesay, Hon. FRSL, FRSA, works in literary project management and creative professional development with adults and young people of African descent. From 2001 to 2015 she published SABLE LitMag, a black and white magazine for emerging writers of colour. She has edited anthologies of work by writers of African descent in drama, poetry and fiction and has published and broadcast her own creative work including a poetry collection, Irki (2013). She received a research and development grant from Arts Council England and a Society of Authors Award to research her second collection, The Modern Pan-Africanists Journey (forthcoming). She is the Publications Manager for Inscribe/Peepal Tree Press supporting the writing of Black British writers, curating a series of anthologies, the latest one being GLIMPSE: Speculative Fiction by Black British Writers (2022). She co-authored This is the Canon: 50 Books to Decolonize Your Bookshelf (Quercus, 2021). She co-founded the Mboka Festival of Arts, Culture and Sport in The Gambia and is currently developing AfriPoeTree, a Selective Interactive Video of Poetry and Pan-African History for which she received Arts Council England funding. She was an AHRC Techne funded doctoral student whose research was on Black British Publishing and Pan-Africanism at Brighton University and now has an Early Career Research Fellowship: Inclusion, Participation and Engagement at the School of Advanced Studies, London University. Her thesis is due to be published by Africa World Press. She is a member of the African Literature Association (ALA), Association for the Worldwide African Diaspora (ASWAD) and is on the Council of Management for the African Studies Association (ASAUK). She is a Kennedy Center Fellow in Performing Arts Management and a Kluge Fellow (The Library of Congress). In 2020 she received an MBE for services to Literature and an Honorary Fellowship from Goldsmiths, University of London.

Dr Devika Mehra is a Post-doctoral Research Associate in the School of English Literature, Language, and Linguistics at Newcastle University. Her current research project combines two interconnected strands: exploring the importance of archival material of Grace Nichols/John Agard, Grace Hallworth, and Valerie Bloom to address issues of race and diversity in archive centres and museums; and the role of young people's voices in increasing representation in children's book awards and prize culture. Before this she was a Fellow at the Internationale Jugendbibliothek, Munich, in 2020. She worked on select British children's fantasy literature by women writers to understand the generic development of and the construction of childhood in 20th-century children's fantasy. Her doctoral thesis defined and analysed the evolution of children's cinema as a genre in India, its emergent trends and transitions. Her areas of interest include 20th-century middle-grade children's fiction (British, American and South Asian), children's cinema (non-Western and Western), global and South Asian film studies, contemporary graphic novels and digital texts for children, and transnational digital media politics. She has worked as a Lecturer in the Department of English (Institute of Home Economics, University of Delhi) from 2015 to 2019 and has taught modules on contemporary and 20th-century literature and academic writing to undergraduates.

Dr Yewande Okuleye’s interdisciplinary practice in science, qualitative research, and health humanities investigates methods and systems which reveal and recover overlooked, misrepresented, and forgotten histories. This praxis is informed by Audre Lorde’s call for us 'to speak truth to power' to activate civic empowerment. Yewande invokes art, music, poetry, and performance as channels to encourage discussions about blackness, social identity, and power in relation to health equity.

Dr Annie Webster is an Early Career Researcher specialising in contemporary Arabic literature. She completed her Wolfson-funded PhD at SOAS in 2020 with a thesis titled ‘Stories of Creative Destruction in post-2003 Iraqi Fiction’. She also holds an MSc in Arab World Studies from the University of Edinburgh and a BA (Hons) in English and Related Literature from the University of York. She is currently working on a monograph, which builds on her doctoral research, exploring how contemporary Iraqi authors engage with the diverse ecological consequences of the 2003 Iraq War and how these narratives have circulated as ‘world literature’. Her work has been published, or is forthcoming, in Literature and Medicine, Wasafiri, Comparative Critical Studies, and the Routledge Companion to Literary Urban Studies. Her new project develops interdisciplinary interests in comparative literature, ecocriticism, and multilingualism as it investigates how Syrian Refugees in Scotland are reterritorialising Arabic literary practices to engage with dispersed geographies of resettlement and local cultures. Wider research interests include modern Middle Eastern art and material culture studies, which she has explored by contributing articles to the curatorial platform Arts Cabinet as well as working as research and curatorial assistant for the exhibition ‘Co-existent Ruins: Exploring Iraq’s Mesopotamian Past Through Contemporary Art’ (Brunei Gallery, 2022). She has taught modern Arabic literature (in Arabic and in translation) at the University of Cambridge, King’s College London, and SOAS.